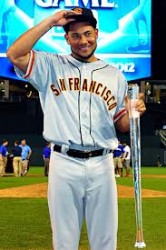 San Francisco Giants’ outfielder Melky Cabrera, who was named the MVP of baseball’s All-Star Game last month, was suspended for 50 games Wednesday (August 15th) after he tested positive for testosterone. The suspension ends what had been a stellar season for Cabrera, who leads the National League with 159 hits and is second in batting average at .346, and puts the Giants’ playoff hopes in doubt. The suspension would extend into the playoffs if the Giants advance.