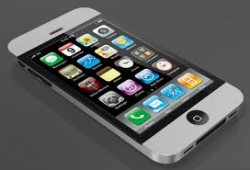 The iPhone 5 hit stores on Friday.

Even though the atmosphere in lines around the world wasn’t as exciting as in past years — in part thanks to sponsored human billboards and protesters — the moment the clock chimed 8 a.m. at Apple’s retail stores around the world, cheers erupted. The iPhone 5 has arrived.  The iPhone 5 is the latest generation of Apple’s popular smartphone. In appearance, it is similar to the iPhone 4S, its predecessor, though it has a 4-inch display (rather than a 3.5-inch display) and is a bit thinner. The iPhone 5 offers 4G LTE connectivity (meaning users will see faster data speeds), improved battery life, a faster processor, and a lighter body. Out of the box, the new smartphone will run iOS 6, the latest version of Apple’s mobile operating system, which means that it will have a significantly improved version of Siri, a new app called Passbook (which will store boarding passes, discount cards, and more for users), and about 200 new features. Much to the dismay of many, the new operating system does not offer a Google-powered Maps app, but instead uses Apple’s own creation (which is not earning much praise so far).