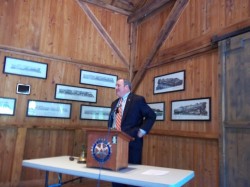 Congressman Jeff Duncan was full of numbers and statistics during an appearance today in Walhalla. The amounts in spending and debt, in the trillions, may have made it difficult for the Rotary Club members to digest their meal. Earlier in his talk, Republican Duncan acknowledged media reports that when it comes to getting things done, his Congress has a poor record. But he said there are reasons for that and suggested they are political. The first term lawmaker who seeks re-election in November indicated he wants the Republican-controlled House to be resolute and not soften its positions when it comes to agreeing to bills that might have a better chance to be passed by the Democrat-controlled Senate. But Duncan today was not all about spending and borrowing, he spoke from his vantage point as a member of the House Committee on Foreign Affairs. In answer to a question by Rotarian Lamar Bailes about the potential of a war between Iran and Israel, Duncan, a 1966 native, lamented what he called the biggest threat of his lifetime.