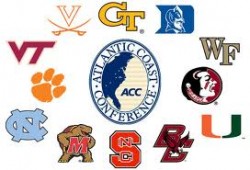 Clemson running back Andre Ellington and center Dalton Freeman headline a list of eight players named as the Atlantic Coast Conference Football Players of the Week, announced by the conference on Tuesday. Ellington rushed for a nation-leading 228 yards and Freeman played every snap at center as the Tigers defeated Auburn, 26-19. Virginia Tech also had two players recognized from its 20-17 Labor Day Monday night overtime win against Georgia Tech. Jack Tyler was named the Linebacker of the Week after tallying a conference-leading 17 tackles, and teammate Cody Journell was named the Specialist of the Week as he connected on a game-tying field goal on the last play of the regulation and the game-winning kick in overtime. Duke’s Conner Vernon, the Receiver of the Week, became the all-time leader in receptions in Blue Devil history. Florida State’s Bjoern Werner, the Defensive Lineman of the Week, had four sacks for minus-28 yards in just over one half of play. Wake Forest’s A.J. Marshall returned an interception 39 yards for a touchdown in a 20-17 win over Liberty and was named the Defensive Back of the Week. Miami’s Duke Johnson rushed for 135 yards and two touchdowns on just seven carries against Boston College in his debut.

Halloween on the Green